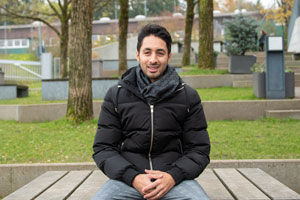 Work hard. Persevere. Sacrifice to achieve your goals and dreams. Push yourself and your limits every day. These were the messages ICS students heard from figure skater Chafik Besseghier. An Olympian and two-time French National Champion, Chafik delivered the keynote speech at the ICS Autumn Sports Awards.

The ceremony was a celebration of the teamwork and success achieved by Secondary School athletes who competed on autumn ICS teams – soccer, volleyball, tennis, cross-country running, and uni-hockey. It is a time to reflect on the season, and for each team to present an award to its most valuable player, its most improved player, and a special Coach’s Award. The Coach’s Award goes to athletes who boost team morale, are flexible, have team spirit, give their best efforts, and are always willing to go the extra mile.

Chafik’s opening speech set the stage perfectly for these awards. He spoke of the dedication and perseverance needed to achieve his childhood dream of competing in the Olympics. He told the students, “You can reach all of your dreams when you are serious. It won’t be easy and you can’t think you just clap your hands and it will happen – you have to really work for it. There is a lot of sacrifice, and when you fall down you need to stand up. This is how it is in life, and in professions and in relationships – there are ups and downs.”

Chafik’s message resonated with the student athletes at the award ceremony, and we thank him for supporting and inspiring them. We also congratulate our young athletes for a season of working hard, pushing themselves, and exhibiting stellar sportsmanship in and out of competition.