A 'Final Word' on an Amazing MS Soccer Season

Our Middle School Girls’ (MSG) and Boys’ (MSB) soccer teams completed the season with matches at home and away against Basel. 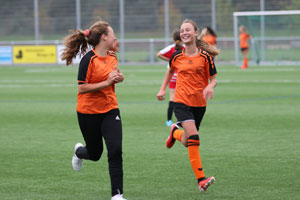 The MS Boys’ Soccer A-team dominated their final game of the season game against ISB on the FIFA pitch and finished with a 7-1 victory. The MS Boys’ B-Team controlled play for most of the game, which ended in a 0-0 draw in regulation time, with the B-Team then winning 4-3 through penalty kicks.

The MS Girls’ Soccer A-Team played a closely contested match in Basel on Tuesday. Each team traded chances in the first half, with Basel making their first goal before the halftime whistle. Prior to that point, Goalkeeper Theodora had made several good saves.

Before the second half began, Captain Karla gave an impassioned speech, and Libby and Ruhani provided some helpful hints, giving the ICS girls team a focus for the second half. ICS controlled midfield play for the first 20 minutes through Molly, Anais and Annabelle's hard work, however Basel managed another goal with only 10 mins left to the match, unfortunately putting a win for ICS out of reach for good.

This ICS soccer season has been an amazing one! All our teams built up their strengths, their overall ball control, and they sorted themselves into positions that best suited both their personal interests and abilities. The MS teams would like to thank their coaches for everything the players have learned from them during the season, and all the teams look forward to doing their best in the seasons to come.