With many of our athletes coming home with outstanding results from tournaments and meets, the recent ICS Secondary Sports Awards brought the 2018-19 winter sports season to a happy end. 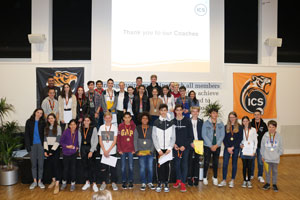 At this year’s Winter Sports Awards Ceremony, Maria Ugolkova was the guest speaker. She is a member of the Swiss National Swim team and represented Switzerland at the 31st Olympic Games in Rio de Janeiro 2016. She also won the bronze medal in the 200 IM at the European Games in Glasgow in 2018. Maria spoke to the students about her perspectives on school and sports. She told the students that participating in sports gives her self-confidence and a positive self-image.  She emphasized that for students, having a connection to teachers and parents who support them is a great thing. She stated that both sports and school are important and that they can co-exist: when your mind needs a break, work your body; when your body needs a break, work your mind.

This winter our ski team surpassed last year’s success story, taking home multiple top three and top 10 placings from the three events they attended during the season. The team continues to grow, improve, and represent ICS well. They have become a team that is always in the mix for the top spots in any competition.

The JV boys’ basketball team had a season of success and growth, working hard and showing great improvement. Competitive in all of their matches and tournaments, the ICS boys won the Sportsmanship award at the SGIS Championships in February. As an up and coming squad composed mainly of Grade 9 students, the JV girls’ basketball teams’ season was also crowned with success: The girls played inspired basketball and came home with the 3rd place trophy from the SGIS Championships in Lugano.

The Middle School (MS) Boys’ basketball A-team competed in three tournament this year, culminating with the SCIS championships in Brussels where they represented ICS very well.  The B-team competed in two tournaments and had a strong 2nd place at the ISSL Championships. As the season ended with the SGIS tournament, the boys dominated their opponents throughout the day and came home with the 2nd place trophy. Both of our Middle School girls’ basketball teams had successful seasons, showing consistent progress and putting them in a position to be even more successful next year.

In the pool, our Middle School and High School (HS) swim teams were strong and took top spots at their meets.  A highlight was the ZIS Invitational meet where both teams left with multiple top 3 and top 5 finishes. The MS team had 8 top 5 finishes and 6 top three finishes.

The HS badminton team took part in 5 events this year and as usual, they were very strong competitors and had multiple players vying for top placings. The team took home a number of top 3 finishes over the season.

Maria finished her talk by saying, “chasing what you love is difficult, but worth it. If you have a passion for something, pursue it as much as possible.” That is exactly what our athletes have been doing throughout the entire winter and as a result, it has been another very successful season for ICS Athletics. We sincerely congratulate all our athletes and their coaches and we applaud them for their accomplishments!