Celebrating the achievements of our student athletes. 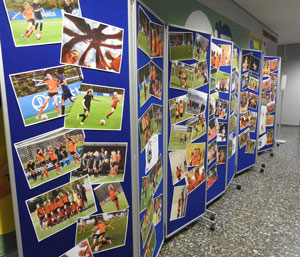 The annual ICS Autumn Sports Awards celebrated the team and individual accomplishments of our student athletes. Our cross-country, soccer, volleyball and tennis teams all enjoyed great success in both tournament standings and reaching personal and team goals. Highlights included the following:

· The Middle School Boys’ Soccer A teams both placed 2nd in ISSL and the A-Team were 2nd at SGIS Geneva and 3rd at SCIS in Brussels.

· The Middle School Girls’ Soccer A team took 3rd at the SGIS championships and were undefeated against ZIS.

· The Varsity Boys’ Soccer placed 2nd at ISSL and 3rd at the SGIS championships.

· The JV Girls’ Volleyball team were named Sportsmanship Award Winners at the SCIS in Munich.

· The Middle School Boys’ Cross-Country team were the overall champions at the TASIS Invitation.

Those attending the awards ceremony received a powerful message from guest speaker Mike Abromowitz. Having achieved success internationally as a Touch Rugby player and coach, Mr Abromowitz shared stories of what sports mean to him. He described how the friendships he has formed in sport are priceless to him. The experiences he has shared with teammates far outweigh the value of any trophies and awards he has received. He treasures the personal and team growth far more than winning matches and tournaments.

Mr Abromowitz also enables others to reach those personal achievements. He has worked as a Paralympic guide, supporting skiers who are visually impaired. Linked only by an intercom system in their helmets, he skis in front of the athletes and gives turn-by-turn directions at speeds over 100 km/hr. He described the admiration he has for those athletes and the lengths they go to so they can compete.

Mr Abromowitz has also coached for Disability Snowsport UK, enabling those with disabilities to ski. Through that work he experienced what he considers the greatest moment in his sporting life. He recounted how he coached a young, non-verbally communicative girl with cerebral palsy to ski down an indoor slope next him. The girl’s joy in the experience was so great that she kept calling out, “Again! Again!” Mr Abromowitz described the immense satisfaction he found in being part of that special moment.

It was an emotional finale to his message that competition results are less important than the personal growth of athletes and the memories and friendships formed amongst teams and competitors.

We thank all of the athletes, coaches, families, and ICS staff who make our sports seasons possible. We are proud of our athletes and the efforts, dedication and sportsmanship they display both in and out of competition.