On Wednesday evening 6 June, ICS honoured our Middle School (MS) and High School (HS) athletes at the Sports Awards celebration in the DSC. 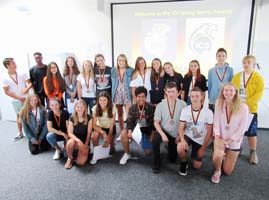 ICS athletes and their families were invited to come together for the Spring Sports Awards in the DSC on 6 June. Promptly at 16:30, the athletes were welcomed in rooms 6 & 7 in the DSC, enjoying highlights of the spring season, team pictures and a video show. During the following half hour, the individual teams celebrated in separate rooms at the DSC as their coaches revisited the sports season's key moments with them and the athletes received their spring season awards.

The following MS and HS athletes were honoured with the Most Valuable Player (MVP), Most Improved Player (MIP) and Coaches' Awards this year:

When the teams all came together again in the DSC 6/7, the athletes were called to the front of the room and a slide show of the award winners from each of the teams was shown. The Sports Awards concluded with an apéro, and the slide show in the background continued to highlight the impressive achievements of our individual athletes and teams.

Primary Athletics award winners will be honoured in a separate ceremony during the final Primary assembly on the last day of school in June.

Our sincerest congratulations go out to all our athletes and their dedicated coaches and helpers for their ICS team spirit, sportsmanship, and remarkable accomplishments. Our best wishes accompany them as the spring season comes to an end! Go Tigers!