At the Primary Winter Sports Awards Assembly, we honoured the three sports teams that represented ICS the season's inter-school competitions. 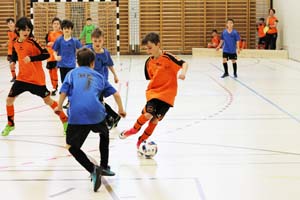 Exhibiting great 'Tiger Pride' at practice as well as during their tournaments and competitions, there was great enthusiasm and 'Tiger Spirit' among Grade 4-5 boys and girls in our Primary Swim, Ski and Boys' and Girls' Indoor Soccer teams! All the teams performed at a high level in their respective sports and represented ICS very well.

Our Primary Swim Team had a very good season. They competed in two events over the course of the year, training as a committed and dedicated group and showing a lot of improvement. Ending their season on a strong note, at the final ICS Invitational meet in Uster our swimmers came home with four, top 3 finishes! Jasmin J took this year's Most Valuable Player award (MVP) with Max L named as Most Improved Player (MIP). Congratulations to both swimmers for their impressive achievements.

The G4-5 skiers were a small but very dedicated group. They competed in 3 competitions this year, showing great improvement over the course of the season and representing ICS well at their competitions. Although they are only in their second year of inter-school competitive skiing, our Primary skiers have contributed greatly to the growth and development of the ICS Primary Ski team program.

The Boys' G4-5 Indoor Soccer team had two teams in the SGIS Championships which were hosted at ICS this year. Both teams played great soccer throughout the day, including four clean sheets, with the ICS1 team bringing home the 3rd place trophy in a strong and very competitive tournament.

The Girls' G4-5 Indoor Soccer team also sent two solid teams into the SGIS Championships at Farlifang and both teams played well throughout the competition. With convincing victories that included four shutouts throughout the tournament, the ICS 1 team finished with a very strong 2nd place. At the Winter Sports Awards Assembly, Victoria dS took the Girls' MVP award with Lauren S named MIP, and the Boys' Indoor Soccer Awards went to Vir K as MVP and Nicholas C as MIP.

Well done to all our ICS Primary swimmers, skiers and soccer players for showing great commitment to the ICS Athletics program, for their sportsmanship, and for their dedication and determination in reaching their team's goals!