What a Team! Hard work, perseverance, resilience, and creativity – ICS celebrates our TechTigers!
23 Apr 2021
Share to FacebookShare to TwitterShare to LinkedInShare to PinterestShare to EmailPrint this page

Following a successful rookie year in 2019, the ICS TechTigers team were committed to building and programming a better robot for the 2020 tournament season. 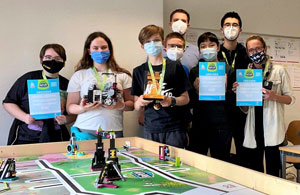 Despite COVID uncertainty and the treat of another lockdown, the ICS TechTigers, coached by two ETHZ Robotics students working for our trusted provider TechSpark Academy, were determined to score higher points and possibly win a trophy as they started preparing for the First Lego League (FLL) tournament season in mid-September 2020. The coaches, Dominic and Victor, had competed in Lego Robotics tournaments while in high-school and were excited to coach the ICS TechTigers.

This year’s FLL theme was ‘RePlay’ and focused on staying active and encouraging the local community to be more active as well.

Due to ongoing restrictions the first FLL tournament, which was scheduled to take place on 16 January, had to be changed to a hybrid format and the actual competition date was delayed a total of four times! However, the ICS TechTigers team used the delay very productively to optimise their robot design and code.

In early February, the team was informed that the tournament would not take place until late March or early April. At this point, the ICS TechTigers made the decision to rebuild their robot entirely: They had identified several flaws in the original robot’s design and reliability and were delighted to have the extra time to redesign it and address these issues.

Kate Mckee from TechSpark recalls, “It was amazing to see the kids discussing the pros and cons of the redesign and then make a unanimous decision as a team to scrap the old robot and build a new model. We warned them that this was a bit risky and that we would probably need to start meeting on Saturdays (in addition to the usual Tuesday session) to make this work - the students were delighted at this prospect.”

During the next two months the students worked tirelessly on the new robot design, coding, testing and optimising. By the end of March, finally happy with the robot, the TechTigers and their coaches were ready to start their timed 'Robot Game' runs.

The COVID-compliant tournament rules required the team to submit 3 uninterrupted and unedited videos of their 'Robot Game’ runs. These were 2.5min intervals in which the robot must complete as many missions as possible on the challenge mat and score as many points as possible. Kate Mckee estimates that the team needed between 200-300 attempts to capture their 3 highest scoring runs, but they continued to persevere until they finally captured their optimal run - scoring 430 points!

Because this season’s theme (physical activity) somewhat overlapped with last season’s research project, the |TechTigers were able to re-use a good part of the research they had done last year to create their new project presentation. Their project, building a safe swim channel across the lake of Zurich between Küsnacht and Rüschlikon, focused on encouraging our local community to be more active outdoors. The students researched the cost, infrastructure, logistics and implementation of the channel, which would host three strategically placed floating platforms allowing swimmers or paddle-boarders to make better and safer use of our lake, and presented their project in a video recording.

All the videos were finally submitted on 2 April and the team were ready for the virtual tournament day on 10 April which included three sessions: Robot Design presentation with a code review and research project Q&A; an evaluation and feedback session; and finally, the Awards Ceremony in the late afternoon.

The ICS TechTigers scored 430 points in the ‘Robot Game’ ranking the 2nd in their regional tournament and 3rd in Switzerland, and they won in ‘Robot Design’, having particularly impressed the judges with how compact and functional the TechTigers’ robot was.

The team also got a very high score on 'Core Values’, which is evaluated based on teamwork and energy. Their 'Research Project’ was also well received, scoring 28/40 points. The judges noted that although the team clearly did a lot of research, they were less successful in communicating their idea effectively in the allocated 5 min time-frame. The TechTigers welcomed the judges’ feedback and are determined to work on improving this area for the next season’s competition.

We are extremely proud of our ICS TechTigers team: We commend them for their hard work and the impressive progress they have made, considering this was only their second FLL season! The students are more motivated than ever to qualify for next season’s European final, and are already thinking of adaptable research project ideas as well as new attachment ideas for their robot,‘Malteser Munching TigerBot 2.0’.

The TechTigers are also determined to get more students involved next year and to create an ICS TechTigers Junior team, whom they can help support on their first FLL quest.

All the members of the ICS TechTigers students received a medal, and the glass team trophy for winning the Robot Design prize will now be on display in the trophy cabinet at ICS. Congratulations and well done, ICS TechTigers!