In consideration of the Russian invasion of Ukraine and the ensuing humanitarian crisis, a group of ICS students joined forces to develop ways to lend support.

The spring semester has not been short on noteworthy developments. Shortly after the Russian invasion of Ukraine, a group of ICS students formed a support group known as the Humanitarian Aid Action Group. The students planned to undertake initiatives and raise awareness of the devastating impact brought on by the armed conflict.

In line with the IB Diploma Programme (DP) and the core component of Creativity, Activity, Service (CAS), the projects highlight specifically Service in Action. We observe the pupils’ social and intellectual development, and academic improvement whilst engaged in the programme that provides optimal experiential learning and action learning. Furthermore, in promoting a culture of care, youngsters are able to explore new possibilities as they work toward a common goal. 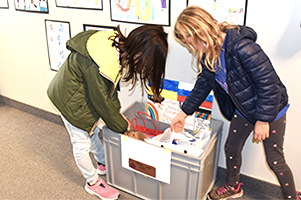 Early in the project management phase, the youngsters researched a diverse number of non-profit organisations and charities to work with. After some discussion and deliberation, the group narrowed down their selection to four organisations. An intention was to pinpoint two local organisations and two international ones and allow for a possible fifth charity/organisation to be determined at a later stage and upon evaluating developments. The non-profit groups chosen, included:

One of the early actions involved organising the campaign “Wear White for Peace”, in which our school community was urged to wear white on 16 March - as symbols of peace are frequently rendered in white.

Student volunteers who took the lead in this project prepared a Secondary School assembly, providing updates and encouraging our community to wear white in a display of unity. The results were inspiring and the voluntary donations that the initiative included resulted in raising nearly CHF 2900. As one student mentioned, “As a group, we feel that this initiative not only helped the community to talk about what is happening but also gave us the space to reflect and put things in perspective”.

A popular ICS faculty event is the “Quiz Night”, where a generous portion of funds raised (CHF 3500) was donated to the designated charities. In partnering with parents, community members and charitable organisations, the group was able to hold additional fundraising along with donation drives for necessary goods and supplies.

The Student Action Group researched the needs of the community to align contributions with those urgently sought. Then the youngsters coordinated a number of donation drop-off sessions of personal care items, sleeping bags and blankets for a local organisation to deliver to refugees fleeing to Poland. Subsequent collections included items such as nappies and baby food for distribution to refugees who recently arrived in Zurich.

The group also reached out to a local collective, Küsnacht Helping Sonnenhof, to assist efforts in sourcing aid and much needed products for the more than a hundred mothers and children seeking shelter in the area. At our school’s recent International Festival, the students were active in raising an impressive sum for their designated charities.

Core strengths displayed by the team and observed by a faculty member assisting with the efforts included their high level of motivation and their unity in acting quickly to solve problems. Although a variety of ideas were initially conceptualised, not all could be carried out due primarily to Covid restrictions. A final fundraising effort for the academic school year is planned to take place during the Secondary School Design Exhibition in June. Afterwards, the Humanitarian Aid Action Group is to reconvene in the new school year, so, stay tuned for further updates.