It is said that Poetry is the centrepiece of oral tradition, and that writing poetry promotes literacy, academic success, and greater social progress. In a workshop to encourage independent writing, students were able to explore and share ideas. 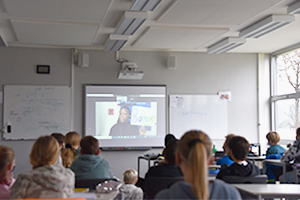 At ICS, Grade 6 students have been putting pen to paper for challenging adventures in poetry writing. Recently, London-based Kat Francois, poet, performance artist and BBC TV & World Poetry Slams Champion, led students in a virtual lesson on writing poetry. The objective was for students to craft a poem by the end of the workshop – one that they could recite to their fellow classmates.

With a “Welcome to Kat’s Class,” Ms Francois presented on her personal background, and introduced poems she had written regarding her own childhood experiences. Listening as she reads aloud, the powerful poetry captivates the students. And they are discovering poetic forms they will be able to learn to express their ideas.

The exercise aligns with our school’s support of children’s language and literacy acquisition, and in promoting critical thinking. After Ms Francois had taken the class on a wordplay journey, the focus was on vocabulary. The group brainstormed on words that start with the letter B. Examples of Alliteration followed, and students were instructed to place two words together that begin with the letter B. Then as a review, the pupils exchanged their written texts with their schoolmates’.

In the next challenge, the term Simile was introduced; students were to write down four examples and to share those with their friends. The five senses (hearing, smell, taste, sight, touch) was the theme, and Ms Francois sought originality. For poetry writing relies on the senses and emotions, after all, and is key in learning to express ideas and feelings.

The ideas to use as starting points included:

-  Smells that the individual likes or the smells they know daily.

-  Tastes, and whether they like sweet, sour or about those especially familiar to them.

-  Sounds that they hear every day, “What is the soundtrack of your life?”

-  Sight, as in what would the student take a picture of that pertains to their identity?

-  Touch, for example, what does the student like to touch?

With these directives, the exercise titled I am a Poem, had the youngsters writing verses about their personality, their hobbies. Ms Francois reminds them she is not seeking rhyming verses. A handful of students volunteer to read their works out loud, to which the class applauds excitedly.

The workshop, as part of the English Language & Literature unit on Poetry, connects the pupils with each other and with the world in a semblance of play, yet in a thought-provoking way.