Can Art open a child's mind in ways that Maths and Science cannot?
9 Feb 2022
Share to FacebookShare to TwitterShare to LinkedInShare to PinterestShare to EmailPrint this page

The IB Primary Years Programme (PYP) highly regards the arts and promotes creative thinking and innovation. During a recent visit to the Tinguely Museum in Basel, Exploration, Experimentation and Reasoning became key areas of focus for ICS Grade 1 students. 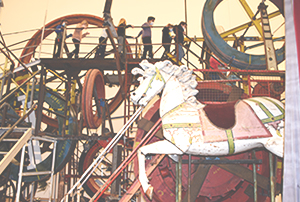 The Arts are integral to the IB PYP, by which creative thinking and innovation are given prominence. Approaches are anchored in asking meaningful questions, and for encouraging problem solving and inquisitive thinking. A key concept proposes that art opens a child's mind in different ways than maths or science.

Anticipation and curiosity are at the top of the morning’s agenda as a bus shuttles our Grade 1 students to the famed Tinguely Museum in Basel. After disembarking, the students are met by a Docent-Guide who first asks the children where have they arrived? The class chimes in unison: “In Basel, at the Tinguely Museum!” This is followed by the questions, “Who is Tinguely?” and “what was he known for?” The students respond: “An artist”, and a “machine sculptor”. More details are learned, such as Jean Tinguely is considered one of the great pioneering artists of the second half of the twentieth century. Also, the group is told that what interested him most was how machines work, how they move, the noises they make and their intrinsic poetry.

At this point, the group is directed to a space on the museum grounds to learn a bit more about the art and their tour. The children get settled at the many tables set amongst a plethora of art, crafts and design supplies, where they are asked the question of whether they know what a studio is. Student replies include, it is a room for talks or a space for making stuff; another suggests a studio is where one can discover new things. The docent notes that all those things can take place in a studio, though artists primarily use a studio to work on projects.

Strolling from the studio to the museum, the class observes an antique airplane hanging upside down. The group is asked why would Tinguely hang the airplane upside down? So one can peer into the interior of the plane and its engine, a few suggested. More discovery followed as to the history of the vintage plane and how Tinguely came to acquire it.

The students gather in one of the exhibition rooms featuring large-scale art installations and are asked about what shapes they see. One artwork for review is composed of multiple whimsical elements, the docent elaborates on the fact that Tinguely thought of kids when creating this installation. It contained shaped found objects, primarily black metal wires, wheels, belts, cogs, and crank-shafts - all driven by a small engine. When mechanized, the elements - irregular in nature - rotate in different directions and at varying speeds; their movement is bumpy and jagged, the youngsters are told.

One of the students has been assigned to press the on button, which sets in motion the moving parts with a sound of pings and pops. A rattling cacophony of metal clanging rings out whilst our school group is given the opportunity to climb aboard the sculpture. The massive kinetic art piece features a ladder staircase and a metal platform that winds through the two-story intricacy. Once the class has clambered back down, they discuss what parts were moving on the sculpture and where the movements originated; a student points out “a pulley”. The youngsters enthusiastically repeat the name of the installation out loud: ‘The Wooden Wheels of Grosse Meta-Maxi-Maxi Utopia’. The title refers to ‘Maxi’ being large, and ‘Utopia’ as an ideal or imaginary place; and, the children learn the maze-like sculpture was first exhibited in Venice, Italy.

When viewing a medium-size sculpture, the class ponders the design, gyrating parts, and what it conveys. The docent highlights the properties and history of the artwork, and that there was hesitancy to accept the piece as art - known as “Le Tour” (1960).

More queries and explanations and theories ensue, along with the question, what made Tinguely noteworthy? To this query, many of the youngsters opined, “He invented things“. Jean Tinguely liked to visit flea markets to find certain rare or peculiar artifacts for including in his works, we are informed. The group also learns that the artist left much to chance when designing his works. Chance especially was very important to Tinguely, the docent states.

Tinkering at the Tinguely Museum

Returning to the studio space, the students situate themselves at one of the many tables as they review with a teacher Intentions they had committed to (eg being patient and being kind), and whether these were practised whilst touring the museum. The youngsters were asked what stood out for them at the museum. Receiving the most mentions is the metal clangourous sculpture, ‘Wooden Wheels of Grosse Meta-Maxi-Maxi Utopia’.

Next on the agenda were a couple of hands-on creative endeavours. Both drawing exercises utilised two distinct formats - with unpredictability as a core component. Here, the children could employ imagination and self-expression in producing unique creations. Additionally, the assignment engaged students’ critical-thinking skills, which aids in problem-solving.

Looking at art helps youth develop observation and interpretation skills. Insightful for the pupils on this field trip were topics such as Where artists get ideas, and How artists express themselves. It was a day well spent, exploring, and learning together about a noted Swiss artist and his works.