A number of ICS Secondary students have “connected” to the worldwide movement to combat climate change. 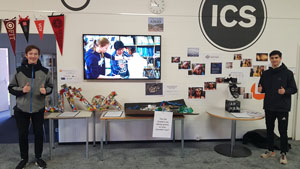 Inspired by 16 year old Greta Thunberg, who began a solo climate protest to raise climate awareness in Sweden in August 2018, students from around the world, including thousands from Swiss schools and universities, have joined the movement and taken up the cause to combat climate change.

According to a 2018 Climate Scenarios for Switzerland report published by Switzerland’s National Centre for Climate Services (NCCS), “Lowering the emissions of greenhouse gases globally could effectively stem climate change. Approximately half of the potential changes in Switzerland’s climate could be avoided by the middle of the 21st century, two-thirds by the end of the century. Although temperatures will still rise in Switzerland, the increases will be much smaller than if emissions are allowed to increase unchecked.”

Reacting to a global problem that affects us all, Secondary students at ICS will be observing the cause on the ICS campus in the coming months with awareness raising which focuses on school-wide solutions and individual responsibilities. The recently formed Environmental Action Team currently comprises a group of Grade 11 students who are keen to collaborate with students across the school. They plan to promote some habit changes which we can all make to reduce our collective impact on the environment. They launched today with a ‘disruptive’ art installation in the DSC building – they placed two days of waste from the same building in the foyer so as to draw attention to unnecessary plastic waste and the potential for even better recycling efforts. They also borrowed and displayed artwork, made by some Grade 5 students, which draws attention to the same issues.

The ICS community is committed to respecting its environment and we are proud of the concern our students are showing as they take steps to raise environmental awareness within our community.