Children can take a dare and express themselves by acting, singing, and dancing - exploring the creative side of their personalities.

By all accounts, the 2022 WinterFest was a terrific success, seeing parents and guests assembled for a live show once again. The Main Hall was filled with students dressed in costume and formal attire, highlighting Secondary vocal groups, solo piano performances, and our string orchestra’s melodies. The sold-out event featured dramatic performances, such as “Teechers”, a play about three students who performed for their teachers, as well as scenes from “The 39 Steps”.

In a preview of what is around the corner at ICS, thespians performed songs from Grease The Musical. And, luckily for those staff members unable to attend the Fest (or obtain tickets) a lunch time Pop-Up concert held the following day, showcased a range of talents that were seen at the WinterFest.

Parents in attendance mentioned how pleased they were with the performances, as one exclaimed, “Thank you to everyone who…. helped give these wonderful kids an opportunity to perform within the safe space of their community. It takes a lot of courage to get onto a stage and perform. It was amazing to see these kids go for it”.

Participation in the Performing Arts helps children to think on their feet, improve memorisation, and boost their self-confidence. The collaborative endeavours foster team building and better empathy in youngsters. In addition, performing live allows students to face their fears and thus, experience educational and personal growth. 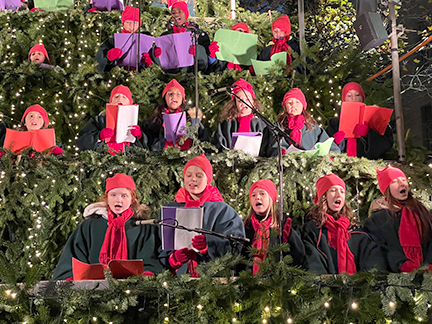 Though we have been basking in holiday harmonies, including those of our Grade 4 and 5 students who energetically sang classics such as Let it Snow, at the annual Singing Christmas Tree, we are preparing for winter days to meet The Summer Nights and Greased Lightning at our Secondary School’s eagerly anticipated debut of Grease The Musical (School Edition).

The production team and those community members keen on reliving musical theatre fun times have been hard at work with the set design of cars and combs, costumes of poodle skirts and leather jackets, as well as makeup, hair, and more. Dress rehearsals are slated for January, and new dates have been set for the performances in the Main Hall. For 2023, the word is definitely Grease.

A sincere congratulations and thank you to all the event participants and volunteers. Wishing you a Happy New Year!