ICS Primary School students put their German speaking and interviewing skills to the test during a regional radio programme for and with children.

By virtue of a contest ICS faculty members had entered and won, Primary students were invited to create their own radio programme and content for a broadcast in German. A number of our Grade 5 pupils were especially keen to produce the live broadcast, centred on the topic of “peaceful coexistence” (friedliches Zusammenleben).

The children had prepared their scripts and questionnaires ahead of time for those ICS teachers and staff members pegged for interviewing. Following the programme’s theme, the conversations focussed primarily on community building and harmonious environments. The challenging questions students posed were preceded by each pupil giving a self-introduction that included their first name, age, and leisure interests. For example, one of the children mentioned they enjoy doing “Trampoline Tricks und Freeskiing”. Each interview segment highlighted a particular not-for-profit organisation the youngster’s respect. For instance, a pair of students chose the Red Cross, whose museum in Geneva they had toured recently. The children spoke about the NGO’s beginning and what projects the organisation undertakes.

Another group of students opted to highlight UNICEF during their segment. They spoke about why their visit to the United Nations influenced their choice, along with founding details and current matters the organisation engages in. The SDGs that UNICEF is linked to were emphasised by the youngsters, who noted, “Hunger, gute Bildung, und Umwelt” (hunger, good education, and environment) as corroboration. 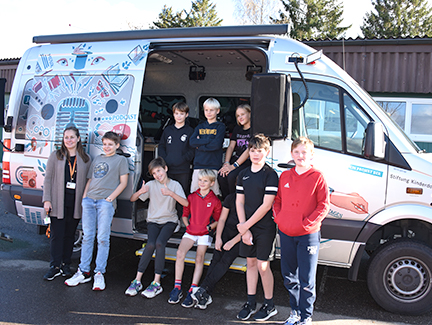 In a discussion regarding community, Primary Principal Mr Atherton, stated, “there are harmonious communities everywhere. One of the best examples is families. Families look after one another, challenge each other. At ICS we like to try to model the sense of community a family offers”. He added, “we are looking to create more opportunities for service and action between ICS and the local community”.

The interviews were interspersed with short musical interludes featuring songs chosen by the students. These included a jazzy song called “Je veux” by French singer Zaz, containing lyrics that are a statement against materialism. Toward the end of their segment, “Applaus, Applaus” by German indie rock band, Sportfreunde Stiller was played - a song underpinned by positive sentiment, about someone who inspires and is important to them.

The children displayed excellent presentation skills, spoke with pep and clear voices, and were able to fastidiously translate dialogue from English into German. The exercise aids in advancing students’ German language public speaking skills and in building self-confidence.

Radio is an important tool for communicating with communities. We thank station Powerup for visiting our campus on that sunny autumn day and allowing students to present their own radio programme. For more details on the children-oriented station that covers the Swiss-German speaking region, which markets itself as providing kid-friendly music and commentary on relevant topics for youngsters, please visit www.powerup.ch